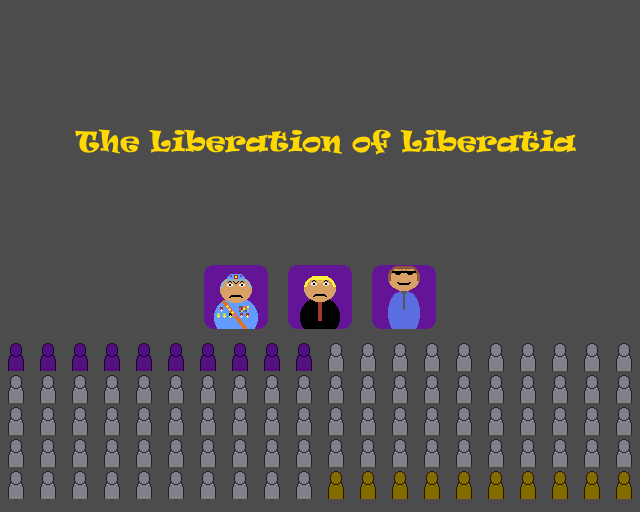 I participated in Ludum Dare 39 this weekend, and made a new game. Just as last time, I decided to participate in the 78 hour Jam instead of the 48 hour Compo. While I was still adhering to all Compo rules, this meant that I could make a strategy game, and still have some time left for polishing the final game.

As in my previous LDs, I developed the game in Java, using the LibGDX framework.

Due to the scale of the idea, I decided that the genre of the game should be a strategy game. Since that genre is more complex, I also decided to keep the mechanics simple, by implementing the game as a "one action per turn" turn-based game, with alternating turns between the player and the  AI-controlled regime.

In my original brainstorm, this would happen by gradually taking control of various government departments, and then finally confronting the leader. But with a bit of prototyping, it became clear that this would take too long to implement properly. Instead, I simplified the scope a bit.

I kept the "population as a resource" element from my initial concept as the core element of the mechanics. As the game goal was still to overthrow the regime, I also needed to decide how to create that as an antagonist. Keeping the idea of overcoming multiple obstacles from my initial brainstorm, I decided that the antagonists should be three overlords instead of one.

By performing this simplification, the game concept was distilled into two aspects, that the game mechanics needed to cover: A way to get/lose the resource of the game (i.e. the population), and a way to defeat the antagonists.

The base mechanics in my turn based game, was to let the player choose one action per turn. So I mapped these two aspects directly into the actions that can be performed. Firstly, a category of actions that affected the population resource, i.e. gaining control over them, making the opponent lose them, or removing them from the game entirely. And secondly, a category of actions used to affect the antagonists.

I decided, that each type of action would have a base percentage change of success. In order to have a purpose for the population resource, this chance is boosted the more population the player controls. It is also lowered by the amount of population controlled by the opponent.

Lastly I added some extra features for variety. Each round has a random type of action gain a bonus, if attempted. The antagonists' chance of success become higher over time (reset by a successful action performed by the player). And you can perform "investigate"-actions against an antagonist, which give a small permanent bonus to later attempts to depose him.

In my previous LDs, music has always been on my TODO-list. But it always ended up being out-prioritized by other features. This time I planned on using 6 hours specifically on sound and music, and prioritized it as a "must-have" feature. So for the first time in seven Ludum Dare participations, I ended up with having actual music and sound for my game! I'm pretty happy with finally reaching that personal milestone. Next on my list: Making good music 😉

Try "The Liberation of Liberatia" now!